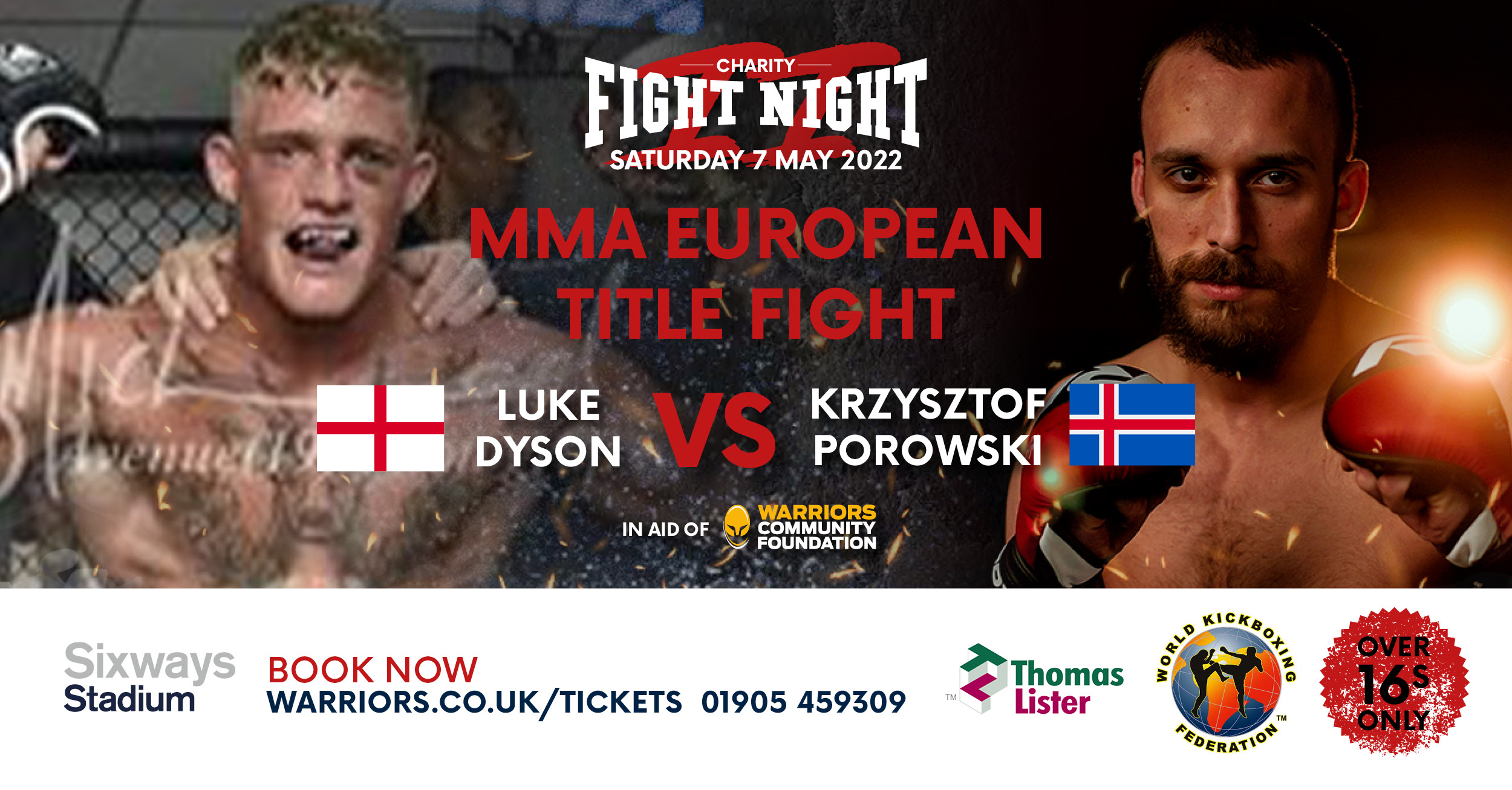 Fight Night II, in aid of the Warriors Community Foundation, is now just over one week away and we are pleased to confirm the full fight card for what promises to be an amazing night.

The full card sees 12 scheduled fights, featuring some big names and exciting prospects in both boxing and MMA. The card is headlined by the main event, where Luke Dyson (England) takes on Krzysztof Porowski (Iceland) for the vacant WKF European Welterweight MMA Championship.

Ticket sales from the event will support the Warriors Community Foundation’s life-changing projects that support over 10,000 vulnerable people every year across a huge range of projects.

There are two ticket options available, standard seating (£45pp) and VIP Ringside seating (£70pp) getting you closer to the action. A fabulous two-course meal is also included with all tickets.

To book your tickets to Fight Night II please click here, or scroll down to read our preview of all the evening’s fights.

Hopwood is unbeaten and one of the hottest prospects on the UK circuit. Harrison brings an aggressive style that lives up to his ‘Anyman’ nickname – expect an explosive opening fight!

In his recent win Joe Harrison proved he is a silky skilled kickboxer, this will be another tough test against the aggression of Jayden Mann.

Birmingham’s Nathan Massey takes on Martin Reffell from Peterborough in a true 50-50 fight there’ll be some great technique on show in this exciting match up!

A junior boxing match with Worcestershire’s Harry Roberts in his debut fight against the more experienced Rylan Mann. Those in the know locally are very excited about Roberts’ skill levels so this will be a fight not to miss.

Yorkshire’s all action Parton is renowned for his aggressive showman fighting; He’ll be up against the wrestling heavy style of Iceland’s Francisco – this should be a corker of an MMA Bout.

Two of the best young female K1 fighters in the UK clash in this hotly anticipated match.

The technical fighting style of Bachra meets the brawling aggression of Whitely – there’s fireworks guaranteed in this 5 rounder!

Bromsgrove’s Cain Parkes puts his electrifying wrestling skills to the test against the experienced tough Yorkshireman Jordan Wheater – an intriguing clash of styles.

England versus Iceland again with two quality fighters with equal levels of experience and skill. Very tough to call who will win this bout.

Birmingham’s Shyrron Burke is always in exciting fights and this one will be no different as Ethan Wiggins prides himself on his violent fighting mindset.

Worcestershire’s Ryan Mole represents England against Helgi Idder from Reykjavik. Mole is a dynamic fighter and will be bringing the heat against the Icelander.

The Main event of the evening is the clash for the Vacant Welterweight Title and this is a fight that will be well worth waiting for. Halifax’s Dyson has a go forward aggressive brawling style and is aiming to take the belt back to Yorkshire. Porowski will be backing his technical skill set to defeat the Englishman and have the belt with him on the plane back to Iceland. Both fighters have earnt their shot at the title and this is guaranteed to be a fight to remember.